When I’m on holidays, I go to church about fifty gazillion times more than I might when I’m at home.

But it can get a bit wearying; every little village has something special. It’s the architecture, the history, the light streaming through the stained glass windows creating patterns on the floor, the quietness and reverence cast by its spell on the believers and the non-believers, the chance to have a sit down, the singing, the magnificent acoustics. It’s a whole grab bag of things.

So what do you do? Stop going? Miss out?

I say, go. And here are ten very good reasons to pop into a church when you’re on holidays.

These are specific reasons why I’m very glad I popped into churches on my recent sabbatical – almost three months in Ireland, France, the UK and the UAE. 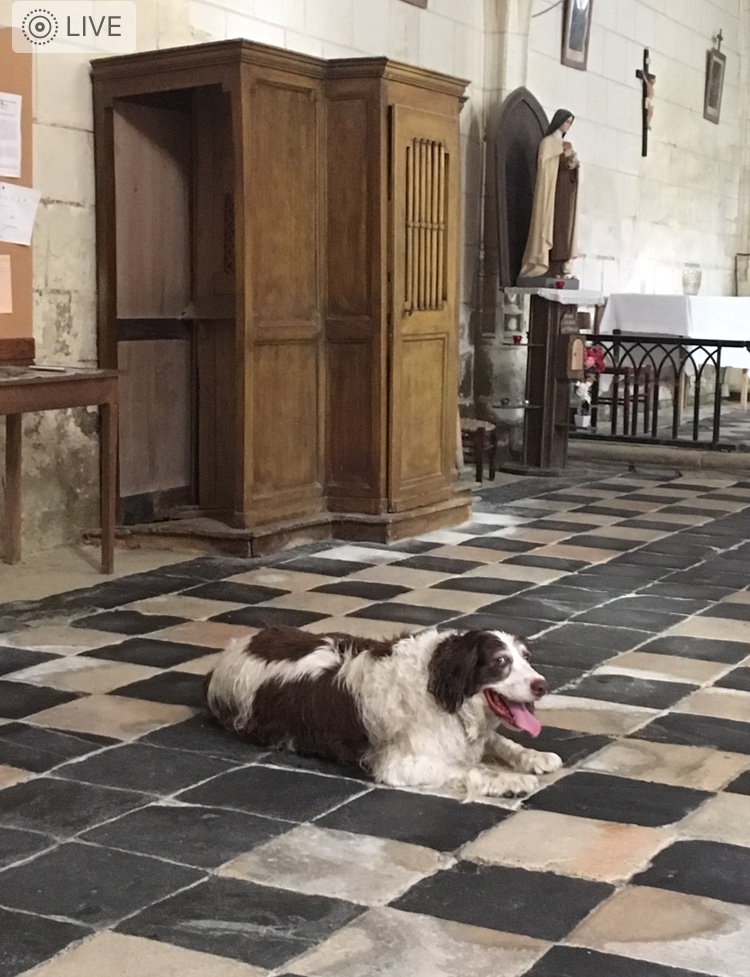 Number one – I got to see the villians waiting for confession. How fascinating to imagine just what they might ‘fess up to once the priest gets to them: digging holes, chasing rabbits.  This is Oscar, the Sinner, at the 16th century church at Crissay-sur-Manse, a village in the Loire region of France which belongs to the official list of France’s most beautiful villages – Les Plus Beaux Villages de France. 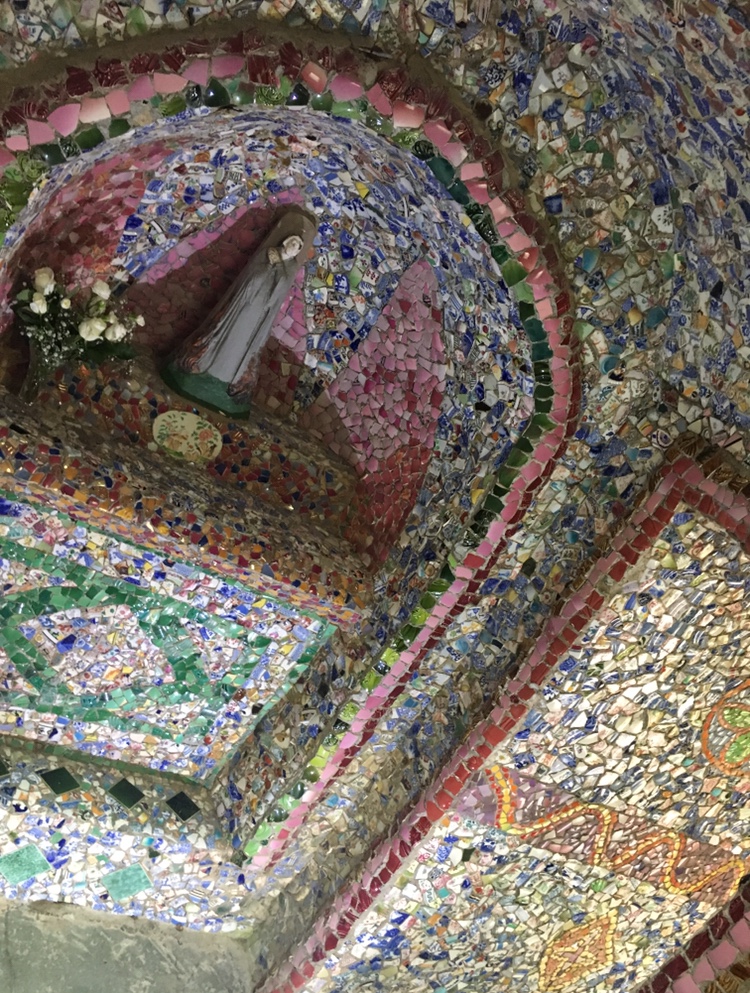 Number two – It’s good to get some tips for reusing the crockery which gets broken between dishwasher and cupboard. I could make a church. Someone did. Here it is; maybe the world’s smallest chapel, decorated with bits of broken china. It’s in Guernsey, in the Channel Islands; you know, the specks in the English Channel which belong to the UK but have a very strong French feel to them. The Catholic brother who built this replica of the basilica and grotto at Lourdes built it three times, the first two iterations he demolished because he wasn’t happy.

Number three – how else would I have known that in amongst the saints and martyrs that usually figure large in churches, there might even be an American president. Here’s JFK at Galway Cathedral. He’s right there alongside Christ. The mosaic commemorates his visit in 1963, and the embodiment of the Great American Dream with an Irish Roman Catholic at the helm of the US. 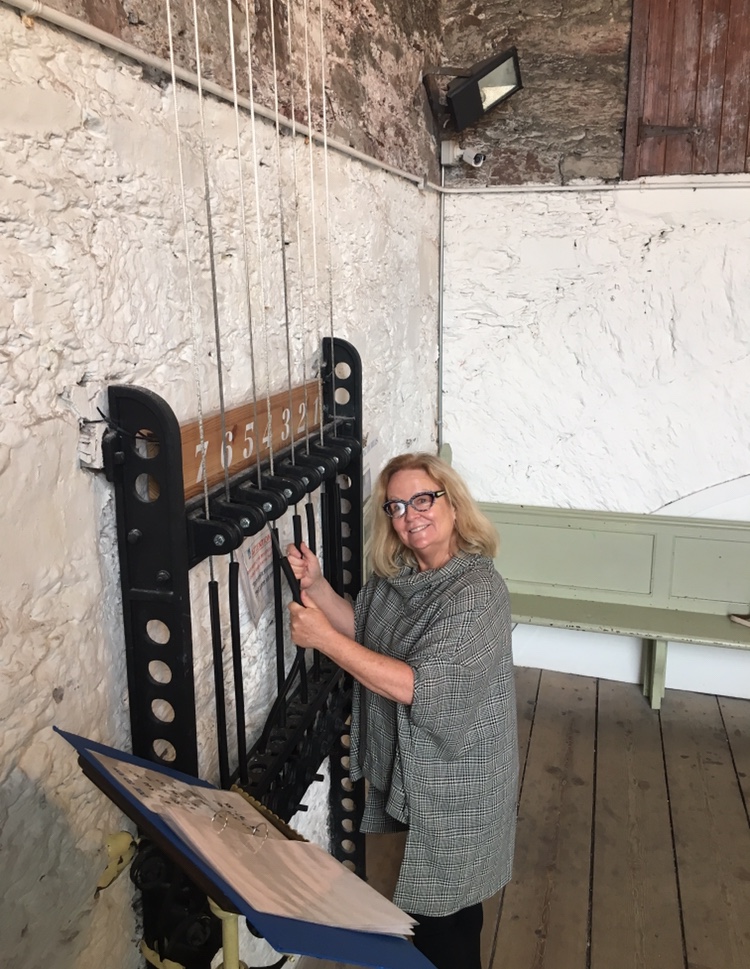 Number four – If I hadn’t gone to St Anne’s in Shandon, I would never have been able to perform Hey Jude for the entire population of Cork. That’s right, the good church folk let me (they’ll let anyone, obviously) play the bells. And made it easy for me by numbering the ropes. After you’ve belted out your best tune, climb the rest of the way to get amazing views of the city. The butter factory is pretty awesome.

Number five – reading epitaphs reminds me to live a big life. Here, in a church in Saint Martins Church, Guernsey, is a tribute to two women, widows of church men, who ‘were lovely and pleasant in their lives’. Poor darlings. Although it would be nice to be lovely and pleasant, surely there better things to be remembered for. Surely.

Number  six – When I couldn’t take another moment of the showy excesses at Saint Tropez’s waterfront (I mean, really? what do you have to do to make enough money to own a boat/ship like those? drug-running, organ stealing, slave trading?), I slipped into the 18th century church and crashed a christening. How timeless does this look? There were so many fresh white flowers in the church, I could actually smell them from the street. Divine. 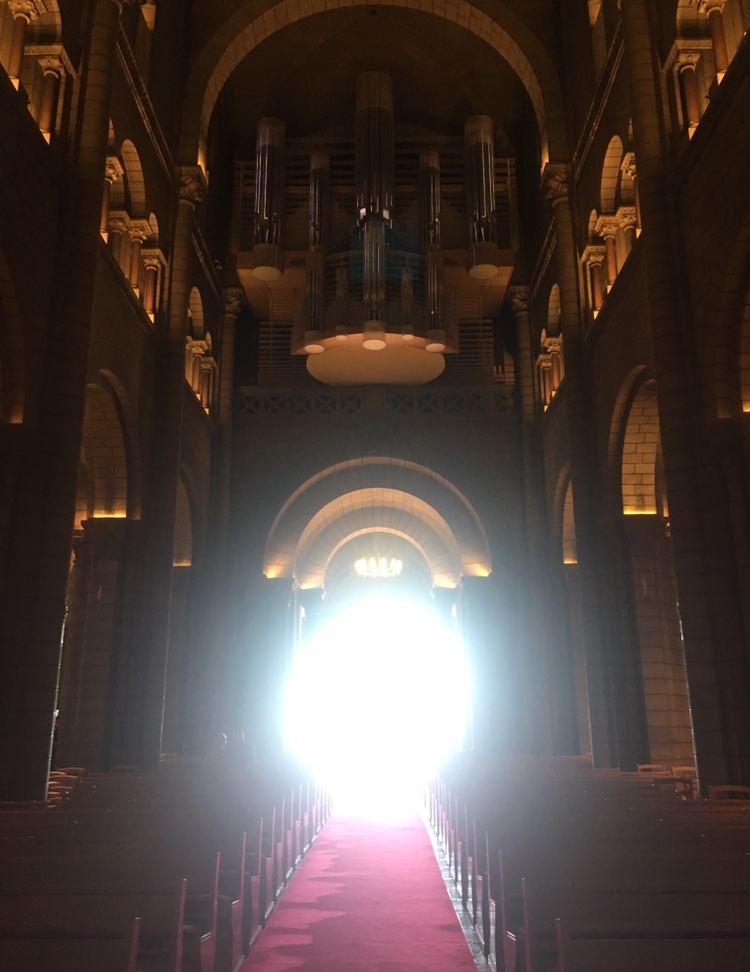 Number seven – Where else but Monaco could I have stood in a church where a wedding watched by 30 million people worldwide took place. Look at that light coming in off the Mediterranean; it looks almost angelic like Grace must have looked in her dress (sorry, gown) which took 36 people three weeks to make. I had my own private princess moment in here. If I had actually looked princess-y, I would be posting that photo instead. Instead, I looked sweaty and unkempt.

Number eight – It’s good to keep in mind that not everything starts and finishes within a reasonable timeframe. My excuses for procrastination might be different to the good folk in Carcassonne, who began building a church in 400-something-AD and didn’t get the Basilica of Saint-Nazaire-and-Saint-Celse finished until the 12th century. All those wars between France and Spain, all that disputed border stuff. Anyway, the very specific nature of the late afternoon sun is quite superb, don’t you think? Such a precise spotlight on the gargoyle. And inside, there were parishioners have a singalong which had the same soothing effect on tired ol’ me as the hum of Tibetan bowls.

Number nine – Everyone needs a pilgrimage. Don’t they? I took a pilgrim’s walk from Esperanza to Rennes-le-Chateau (okay, it was only about 9kms, but boy, was it steep). And when I got to the little mountain top village, there was not a open bar or café in sight. But such great stories of hidden treasure and subterfuge (that’s the priest at work) in this very old neck of the woods. St Mary Magdalene Church attracts visitors in their tens of thousands from across the world (thank you, Dan Brown) and has a statue of a devil just inside the church. The day I visited the church was the same day some person fronted court for desecrating the devil statue.

Number ten – The Grand Mosque, also known as Sheikh Zayed Al Kabeer Mosque, in Abu Dhabi, was the only place of worship where I needed to be patted down before I could go in. Although I had long sleeves, long pants, shoes, socks, and my head was covered, I still was steered into a room where a couple of women checked me out, did up the top button on my shirt and felt my hips, testing out how much give was in my clothes. There were navy, grey and fawn coloured abaya hanging from the racks which were available for visitors who hadn’t dressed as carefully as I had. This place also took the cake in bathroom facilities. Splendid. I went, even though I had no need. Just for the stickybeak.

Do you head into churches when you’re on hols? Or do you suffer church burnout quickly, and steer clear?